Rent Strikes, Fencing, Racial Profiling – What is going on at Fallowfield Campus?

Students in halls are on rent strike, fences were hastily erected and then pulled down, a security guard is being investigated for ‘racial profiling’.  Fallowfield Campus appears to be the epicentre of all that is going wrong for students across the country this year.  The truth is that students have had a raw deal – Coronavirus snatched away their last few precious months of college and then they were then caught up in instability of the exam results debacle.  At last they come away to University and after just 24 hrs of teaching they’re transitioned from in-person to on-line teaching. Lock-down 2.0 happened and they’re fenced into their halls, tensions are high between security and students – students wanting to be trusted, security seeking to ensure that students comply with lockdown and as 2020 begins to ebb away they’ll be looking back with bewilderment thinking: ‘It wasn’t meant to be like this’.

I, like many, look back on my first term as an undergraduate with great fondness.  New found freedoms, new friendship and new experiences.  Misinformed political decisions have taken away that experience from these students and understandably they’re angry, upset and distressed.  It’s the final insult in a year that promised so much. So what do you do when you‘re angry?  Some ask who is responsible and take an ideological stand – and at this moment, when rent is being charged on a room that you cannot leave and lectures being delivered that could be watched anywhere in the world there is only one institution to blame.  But, let’s face it the student has very little power in this situation – holding back on rent in a University budget of over a billion is hardly going to create waves – and hence theologically my instinct is to stand with them when faced with the might of a Russel Group institution.  I weep with them at the loss, I rage with them at the injustice and I stand alongside them (in a socially distanced, face masked way) in their struggle to be heard.

Yet I know there is not a magic money tree, that students fees and rents are an income source for the University – an institution that seeks to operates for the good of the city and the education of humanity.  Then I pause and catch myself as I see what has happened.  A conversation that should be about education has become a conversation about the market and once again I see the insidious power of capitalism. Like a thief in the night it creeps in and steals that which is the most precious and then in a moment of clarity you notice it’s gone, maybe never to be seen again.  The precious pearl of increasing human knowledge stolen by the behemoth of capitalism.  We’ve gone so far down a particular road that students are striking and that courses are cancelled because they’re not financially viable – since when has capitalism defined education?

The students as young people who have grown up in an education system defined by the Education Reform Act of 1988 are conditioned to say: ‘We’re not getting value for money’ – They pay for a service and they expect to receive that service.  The University needs to generate income to pay staff, to enable it to continue in research, to maintain its estate, and one way that income is generated is through student rents and fees.  It’s deadlock.

It’s very easy to blame the other and the systemically adversarial nature of capitalism and patriarchy encourages that as it seeks to inflate power and enslave those with no power – usually those who are already systemically marginalised by the system.  In this situation the power resides in the Universities and nationally the power resides with Government, but ideologically the power lies with us all.  What type of education system do we want and are we prepared to fight (and pay) for that?  This local situation may resolve, but the local problem is emblematic of a wider systemic problem and unless we address the systemic problem of the insidious influence of capitalism on education then many more problems will continue to emerge.  So I ask, how  does education look different when it breaks frees of the shackles capitalism and it’s patriarchal bedfellows?

Surely this first semester should have been written off and the Universities temporarily funded centrally so that the financial pressure of no students and no rent was relieved for the Universities  Inviting students back into the tinder box of coronavirus will create sparks, and sparks light fires.  But no, the students are here and the Universities are firefighting but until we break the stranglehold that capitalism has on education this will continue to be the case. 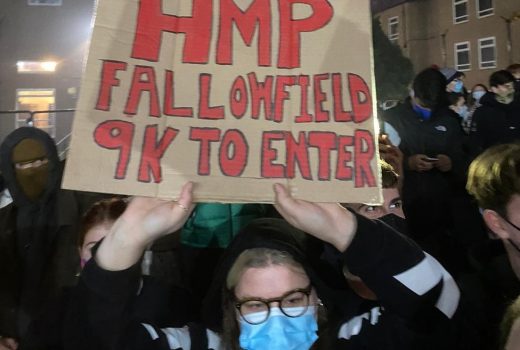